A Knock at the Door 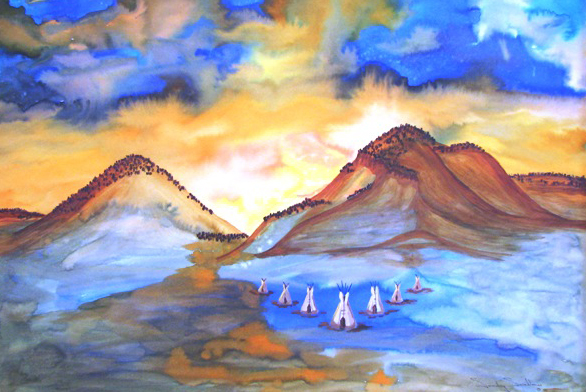 Generosity ( Wacantognaka ), is one of the four traditional Lakota values. A Lakota is to provide for their family. But also it was very important to help the needy in their tribe. The Tribe was a cohesive group that depended on each other to survive. The strong help the weak.

Knock, knock, KNOCK, the dogs barking in the middle of the night. We were rudely awakened. Aunt Jo’s house was on a lonely road in the Southwest corner of the Pine Ridge Reservation. The knocks usually indicated someone was in need of gas or food. Uncle Bud had a big gas tank that was used for the machinery and pickups. As the roads were not good this was needed. It was a long way to the nearest gas station.

Sometimes it was one person, but often it was a car load of people. If it was a family, they were given evaporated milk for babies and food for the adults. Uncle Bud having a tender heart would sometimes slip them some money. But they were always given the gas or food if they were in need.

Uncle Bud and Aunt Jo with my firstborn Clint.

Aunt Jo and Uncle Bud loved children and took in quite a few to raise along with their own, two boys and two girls. This was before people thought about government assistance. You simply helped those in need if you could. It didn’t matter if they were Native American or White.

Sometimes it is very easy to become jaded or cynical about helping others. Thinking it is the government’s duty, or the tribes, church or even their families. But ultimately if they cross our path we are meant to help them. After all if you have it to give it is your blessing and privilege.

The “Oyate” Love the Black Hills
Scroll to top